Sedrick Rowe was a running back for Georgia’s Fort Valley State University when he stumbled on an unexpected oasis: an organic farm on the grounds of the historically Black school.

He now grows organic peanuts on two tiny plots in southwest Georgia, one of few African-American farmers in a state that has lost more than 98 percent of its Black farmers over the past century.

“It weighs on my mind,” he said of the history of discrimination, and violence, that drove so many of his predecessors from their farms. “Growing our own food feels like the first step in getting more African-American people back into farming.”

Two of the Biden administration’s biggest priorities — addressing racial inequality and fighting climate change — are converging in the lives of farmers like Mr. Rowe.

The administration has promised to make agriculture a cornerstone of its ambitious climate agenda, looking to farmers to take up farming methods that could keep planet-warming carbon dioxide locked in the soil and out of the atmosphere. At the same time, President Biden has pledged to tackle a legacy of discrimination that has driven generations of Black Americans from their farms, with steps to improve Black and other minority farmers’ access to land, loans and other assistance, including “climate smart” production.

Farms run by African Americans make up less than 2 percent of all of the nation’s farms today, down from 14 percent in 1920, because of decades of racial violence and unfair lending and land ownership policies.

Mr. Biden’s promises come on the heels of a year in which demands for racial justice have erupted across America, and a deadly pandemic has exposed stark disparities in health. Mr. Biden is also seeking to reverse former President Donald J. Trump’s unraveling of environmental regulations.

Land trusts and other local groups, many in the South, have long sought to bring more Black Americans back to farming. Mr. Rowe acquired 30 acres of farmland outside Albany, Ga, after training at a land trust called New Communities, one of a handful around the country that have sought to help more African-American farmers make a living by cultivating the land.

Many of those trusts have also put sustainability front and center of their work with local farmers, tapping into the legacy of Black scientists like George Washington Carver. His work on cover crops, which are planted to help nourish the soil, sought to reverse the damage wrought by single-crop cotton farming in the South, carried out on the backs of enslaved people.

In between planting and harvesting, Mr. Rowe is pursuing a Ph.D. in soil health, researching ways to retain nutrients, cut down on pesticides and sequester more carbon in the soil.

“There’s so much knowledge out there, both what’s been modified from our African forbearers and what’s been created in the South,” said M. Jahi Chappell, who heads the Southeastern African-American Farmers Organic Network, a group of Black farmers engaging in ecologically-sustainable agriculture. But for a long time, he said, “The voices of African-American farmers haven’t really been heard.”

It is a troubled history to overcome.

making up less than 2 percent of the nation’s farms.

Percentage of farms per county in 2017 run by Black farmers 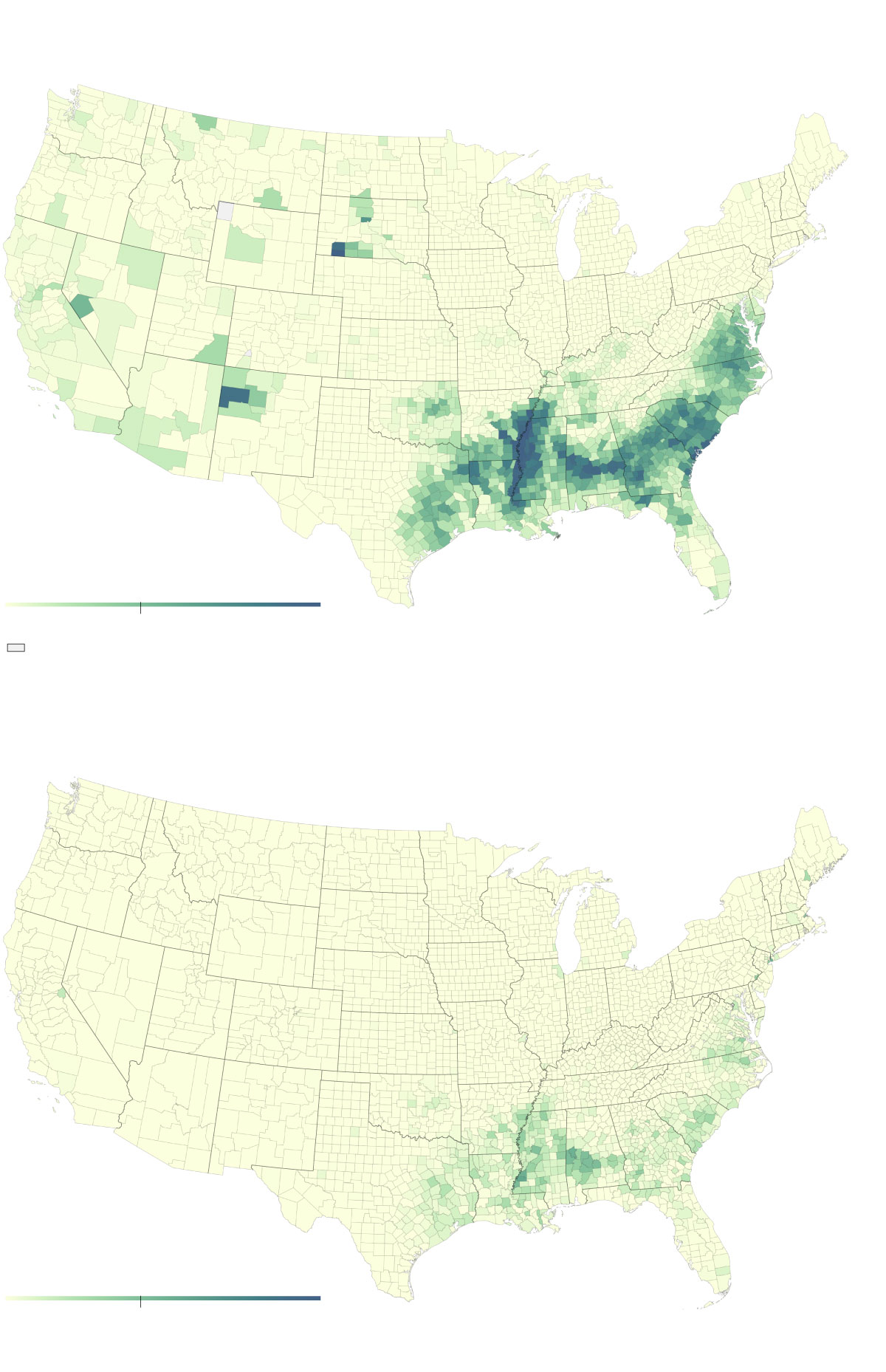 making up less than 2 percent of the nation’s farms.

Percentage of farms per county in 2017 run by Black farmers

2 percent of the nation’s farms.

Percentage of farms per county in 2017

For a brief time after Emancipation, free Black communities spread across the rural South, cultivating all manner of agricultural goods: pecans, peanuts, pork. By 1920, there were 925,000 Black farmers, a fourth of whom were able to secure their own land.

The Jim Crow era brought a violent backlash from white landowners, and Black farmers and sharecroppers became the target of intimidation, bombings and other attacks. The discrimination and racist violence spurred many Black farmers to flee North, often to cities, as part of the Great Migration.

Disparities in access to loans and aid, and well-documented discrimination at the Department of Agriculture, also drove Black farmers from their land. Even as the Civil Rights era started to bring Black Americans equal rights under the law, the rural exodus accelerated as white citizens’ councils in the South, wary of a surge in Black voters, explicitly targeted Black farmers for expulsion from their communities.

“We’ve waited year after year after year. We’ve fought for changes,” said Shirley Sherrod, a former Georgia state director for rural development at the Department of Agriculture and a co-founder of New Communities, the land trust. “Now this agency, and this country, really needs to figure out how to do the right thing by Black people.”

Today, fewer than 35,000 Black farmers remain, according to the most recent Census of Agriculture. (And some experts say the number is even lower.) Land owned by Black farmers has fallen by an estimated 90 percent from the early-20th Century peak, according to the Land Loss and Reparations Project, even as white-owned acreage shrank just 2 percent.

Black farmers who lost their landholdings lost more than the property itself; they also lost the ability to use it for things like collateral for loans to, for instance, send children to college. An initial estimate of the overall economic harm to Black Americans from the historical loss of rural landholdings, calculated by researchers including Thomas W. Mitchell, a professor of law at Texas A&M University, is $350 billion.

“These are the economic consequences of this massive and precipitous land loss that was significantly the result of systemic racial discrimination,” he said.

Efforts to remedy the loss so far have been small in comparison. Starting in the 1990s, a series of settlements has paid out about $2 billion, in total, to a handful of farmers who could prove direct discrimination.

Black farmers continue to face discrimination. As recently as 2015, Black farmers obtained only about $11 million in microloans designed for small farmers in 2015, or less than 0.2 percent of the roughly $5.7 billion in loans administered or guaranteed by the Agriculture Department that year, according to researchers Nathan Rosenberg and Bryce Wilson Stucki.

The most recent Census of Agriculture, from 2017, found that Black-operated farms tend to be disproportionately smaller, and just 7 percent of those farms had incomes of more than $50,000, compared with 25 percent of all farms.

Efforts to address past injustices are gaining momentum.

A Senate bill, sponsored by Democrats Cory Booker, Elizabeth Warren and Kirsten Gillibrand, would permit Black farmers to reclaim as many as 160 acres apiece through federal land grants. The House Agriculture Committee is set to welcome its first Black chairman, Congressman David Scott of Georgia, who plans to invite Black farmers to give testimony on racial discrimination in federal aid. And this week, a flurry of executive actions on climate directed the agency to study ways to encourage “climate-smart” agricultural practices while creating new sources of income for rural Americans.

Still, Tom Vilsack, who if confirmed will head the Department of Agriculture and return to a position he held under former President Barack Obama, has drawn criticism from some groups for his record on addressing discrimination at the agency. During his previous stint at the department, critics say, the agency promoted misleading data to depict a renaissance in Black farming, even as Black farmers continued to struggle to get federal assistance or attention for civil rights claims.

“There’s a very systemic problem of civil rights at the U.S.D.A., and Tom Vilsack is not the one to take on the issue and fix it,” said Lawrence Lucas, a former official at the agency who heads the group Justice for Black Farmers. “He was there eight years and didn’t fix it. So what makes us think he will fix it now?”

Late last month, Mr. Vilsack met with civil rights groups, committing to providing assistance and “a seat at the table” to Black farmers. And the Biden administration has appointed Jewel H. Bronaugh, Virginia commissioner of agriculture and consumer services, as Mr. Vilsack’s deputy. If confirmed, Dr. Bronaugh would be the first woman of color to serve as U.S.D.A. deputy secretary.

In an interview, Matt Herrick, the agency’s top spokesman, acknowledged a legacy of discrimination in federal farming policy.

“The reality is that there are inherent legacy barriers and practices that have prevented Black farmers, and other socially disadvantaged producers, from getting access to programs at the Department of Agriculture,” Mr. Herrick said. “We’re going to do everything we can — the secretary is committed to that — to removing those barriers.”

Those concerns threaten to overshadow the Biden administration’s rollout of agriculture policies that put farmers at the forefront of the fight against climate change.

One early idea from the Biden transition team is a federal soil “carbon bank” that would offer credits to farmers for carbon they sequester in the soil through sustainable farming methods. The plan would allocate $1 billion to purchase carbon credits from farmers at $20 per ton of carbon they trap in the soil. The Biden transition team claimed it could reduce annual emissions of greenhouse gases by 50 megatons, equivalent to the emissions from more than 10 million cars driven for a year.

Scientists caution that uncertainties remain about the ability of farmers to sequester carbon in their soil. Still, such a policy could, in theory, benefit farmers like Mr. Rowe. Recent studies have shown that organic farming, in particular, may help hold carbon in the soil.

For Mr. Rowe, organic farming practices on his modest 30 acres are also an economic imperative: His crop fetches several times the price of standard peanuts on the market. That helps him compete in a business landscape dominated by predominantly white farmers taking advantage of huge economics of scale and subsidies.

HS2 underground protest: Activists ‘being forced out’ of tunnel

Lessons From a Virus Tracing Dud

Eight on trial for burglaries on Paris celebrities

Should schoolchildren still have to self-isolate?

Eight on trial for burglaries on Paris celebrities

Should schoolchildren still have to self-isolate?